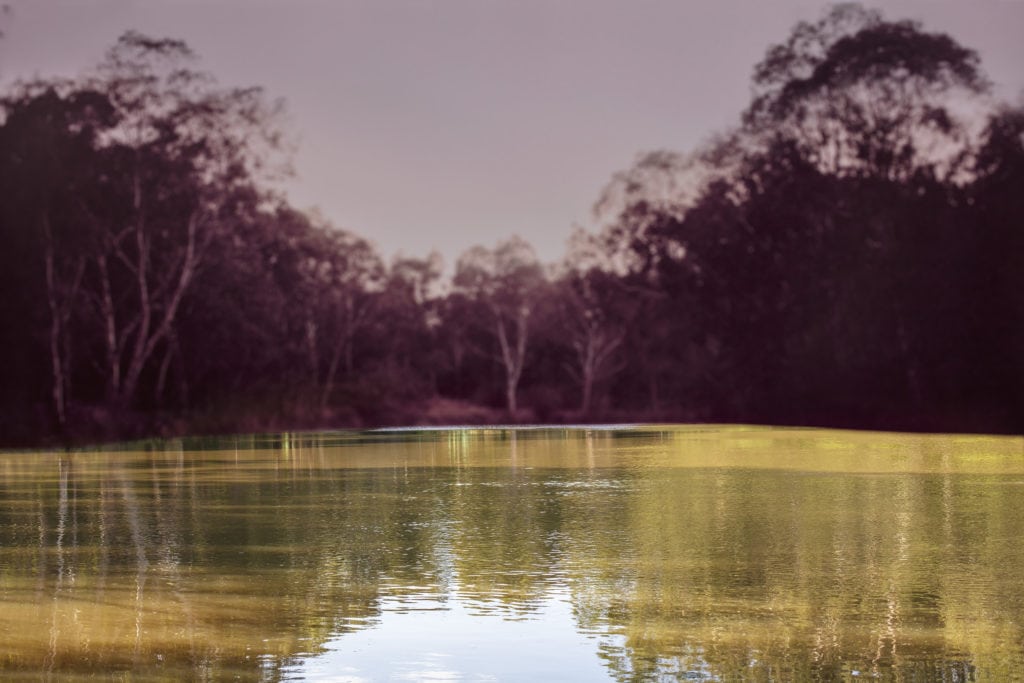 Peta Clancy is a descendant of the Bangerang Nation from south eastern Australia. The ‘Confluence’ series of photographs were created in response to historic photographs that were taken at the Merri Creek and Birrarung confluence held in the State Library of Victoria collection. Historical photographs of the Australian landscape ‘taken’ through a colonialist objectifying lens depict the land as devoid of knowledges, narratives, histories of Country and Place and without consultation with Traditional Custodians. They convey a perspective of land as something which can be owned, altered or overcome.

‘Confluence’ is premised on an in-depth depiction of Place where two bodies of water, the Merri Creek and Birrarung, come together on a culturally significant part of Country for Wurundjeri people of the Kulin nation. This is an ancient landscape with rock formations between 100 to 400 million years old, yet it is also “a very recent landscape”. As Tony Birch wrote: “There’s also a touch of geographical deception here. What we think or what is, in fact, today’s meeting of two waterways, is a very recent phenomenon in regard to Aboriginal Deep Time.” The trajectory of the waterway was altered in the 1970s when the land was gouged away by earthworks during the development of Melbourne’s eastern freeway. The earthworks were undertaken with little regard for the cultural and environmental significance for Wurundjeri Country or people.

The photographs, created through a process of relating to and with Country over time, were developed in consultation with Traditional Custodians. They explore time, light and film and reflect on history, temporality and cultural memory embedded in Place. Created utilising a performative process of returning to the same location with large-scale prints created using a large-format film camera. On Country the photographs are attached to a frame, the print cut into and then rephotographed. The process of layering evokes multiple time frames and perspectives. As such it reflects on the experience of Aboriginal people looking at Country. Bundjalung writer Melissa Lucashenko wrote; “It is like having double vision. We see the world that white people see but we are also seeing a mythic landscape at the same time and an historic landscape.” The photographs document the wind and light interacting on and with the surface of the photographic print. The light reflecting off the surface of the print, and the wind physically moving the paper; pushing and pulling it away from and toward Clancy’s camera. The photographs reflect on the complexities of photographing Country and the impossibility of the ability of a photograph to record or reveal memory, history and narratives of place or temporality from the past two hundred and fifty years (since invasion), around 80,000 years (for Traditional Custodians) or 100 to 400 million years (the age of the geological formations).

‘Confluence’ was developed through cultural consultation and guidance from Wurundjeri Traditional Custodians Aunty Julieanne Axford and Aunty Gail Smith from the Wurundjeri woi-wurrung Cultural Heritage Aboriginal Corporation. Peta Clancy would like to thank Les Walkling for his collaboration with the production of the prints. Peta Clancy is Associate Dean Indigenous at MADA (Faculty of Art Design & Architecture) Monash University.