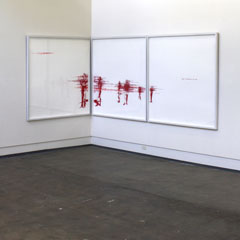 A central theme in Waldach’s drawings and installations, in which she often references literary or philosophical texts, is the collapse of an everyday logic, a crisis of perception. Her figures’ connection to reality is fragmented in the image in the form of quotes and text fragments. Dense text clouds cave in on themselves, obscuring their original content and context. In Waldach’s imagery, the famous “red thread” or “leitmotif” is ripped, figures wander about in search of a new paradigm.

“The world is all that is the case” – thus begins the “Tractatus Logico-Philosophicus” by Ludwig Wittgenstein. Precisely formulated, this slender book is considered a dark, esoteric work accessible to but few in the know. For Wittgenstein words are integral parts of complex human activities that he defines as “language games”.

At the heart of the exhibition “Losing the Leitmotif” is Waldach’s corner triptych “Logical Landscape,” which portrays nearly the entire text and prologue of Wittgenstein’s 80-somepage work comprised of numbered statements. The philosopher’s seminal work posits seven main theses, whose aim is the attempt to express all that can be expressed in a language. The mystical, however, appears beyond that which is stated in the treatise. His essay thus concludes – like Waldach’s triptych – with the final famous sentence: “Whereof one cannot speak, thereof one must be silent.” Accordingly, Waldach’s drawings are populated not by seven but only six figures. Each figure corresponds to one of Wittgenstein’s theses; the final thesis remains without reference.