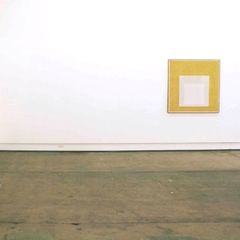 JOSEPH ALBERS (March 19, 1888March 25, 1976) was a German born, American artist, influential teacher, writer, painter, color theorist and pioneer of twentieth-century modernism. Whose work, both in Europe and in the United States, formed the basis of some of the most influential and far-reaching art education programs of the 20th century.

Albers is best remembered for his work as an abstract painter and theorist. He favored a very disciplined approach to composition. Most famous of all are the hundreds of paintings and prints that make up the series Homage to the Square. In this rigorous series, begun in 1949, Albers explored chromatic interactions with flat colored squares arranged concentrically. Painting
usually on Masonite, he used a palette knife with oil colors and often recorded colors used on the back of his works.

Harry Seidler was a student of Albers and they worked on various project, amongst others in Sydney. The exhibition shows works of Albers as well as documents of their collaboration in Australia on the ‘wrestling’ relief in Sydney, which was Albers last work.