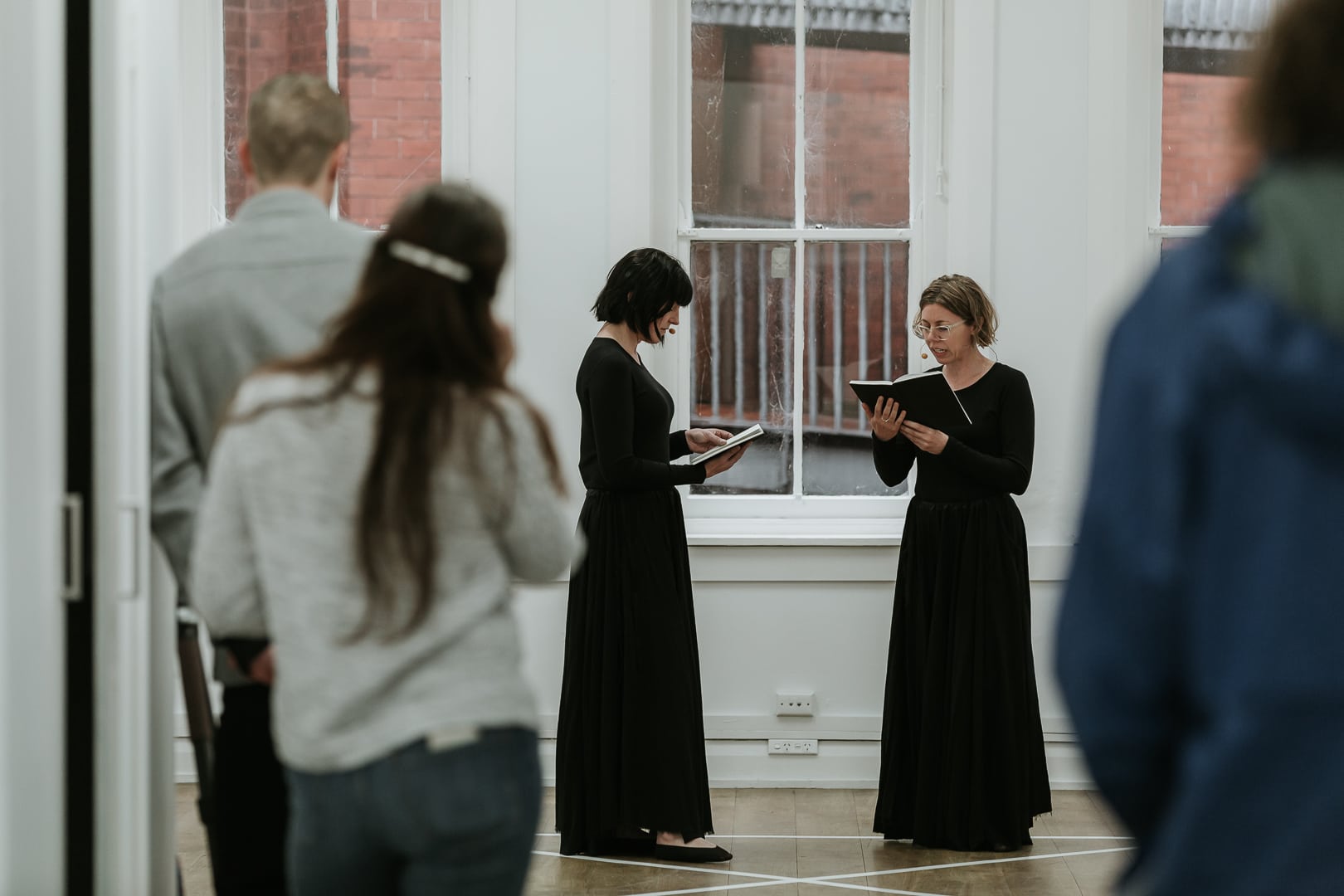 Emma Fielden will present two performance-based artworks at 812B George Street that are like collision studies, investigating how two parts might become one whole or briefly connect. In both ‘Andromeda and the Milky Way’ and ‘The Bells’, Fielden and her fellow performer Lizzie Thomson will follow strict and minimalist patterns of enquiry to find spontaneous points of connection. The resulting physical encounters between charcoal, sounds and bodies ask us to consider the phenomenon of coalescence, alluding to the imagined merging of two galaxies or, ultimately, two humans.

For her newest work ‘The Bells’, Fielden and Thomson read the poem of the same name by Edgar Allan Poe aloud and in chorus with neighbouring church bells. They fold together spoken word, the “tintinnabulation that so musically wells”, and repeated paths around a quad marked out on the floor. When read by one voice, Poe’s poem traces the stages of an individual life, from tinkling youth to clamorous death. This has been transformed in Fielden’s performance by two voices in canon, reflecting upon moments of connection and disconnection between two people whose experiences are deeply interwoven. Beginning at different times, they each mark out a slow passage through the quadrants on the floor that correspond with the poem’s four parts, weaving in and around each other like unfamiliar clockwork. In her instructions for the performance, Fielden notes that “The sound is loud and fills the space. They will ring for fifteen minutes. As the bells begin, the first performer enters quadrant no. 1 and reads part 1.” Seeming to conduct even the encircling sound outside of the space, Fielden’s conviction is matched only by the uncertainty of the outcome. The pulsing repetitions and rhymes of the poem, which varies in length and haste, creates tumbling moments of dissonance and consonance.

Poet Carol Jenkins’ review of ‘The Bells’ is published on The ReviewBoard;

“The cascade of bells and words fills the room in a sonic ballet … so you’re floating in a rhythmic sea of sound, feet just keeping time with the room’s pulse, and you feel a curious mix of being both observer and participant. At one point choristers in white smocks and a robed priest appear and pause, looking in from the walkway. Touché.”