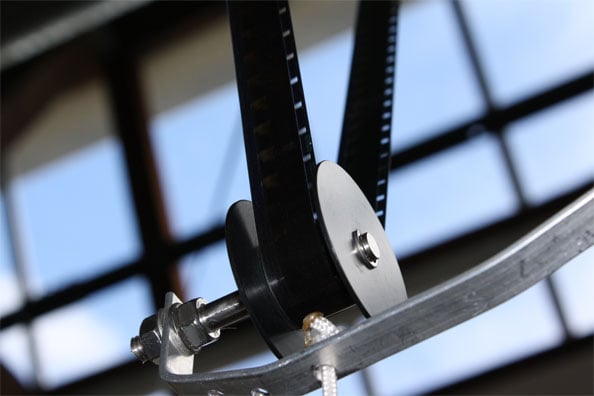 Clemens Krauss (born in Austria, lives and works in Berlin) is visiting Sydney for the second time now, this time as a research artist at the Sydney College of the Arts in Rozelle, where he finalizes his upcoming show ‘In Situ’.

Clemens brings together several conceptual approaches in his work which he has developed within the last three years. The most recent video work Elternhaus / Parental Home was produced in August and September this year. With a 15m long endoscopic camera a 3.30min tracking shot was filmed through the house where the artist grew up in Graz, Austria. Starting from the top floor of an apparently old middle class villa, Krauss works the camera through small pinholes floor by floor downwards until it reaches the floor of the basement before going back up. The invasive intervention into space, the “organic” treatment of biographical environment and the observational role of the viewer remain strongly connected to Krauss’ conceptual and visual language.

?In the 16mm film installation Wandlungen 80 meters of actual film are unspooled widely, via 25 transfer rolls, across the space of the gallery in a permanent loop. While the film itself shows two seemingly sexually unidentified naked bodies, the immersive moment is continued as the viewer walks within the materiality of the moving film strip, projected simultaneously by two synchronized projectors.

?The small 55sec loop video screening, Untitled, shows the moment of Clemens Krauss coming to his parents’ house after an absence of more than one year. This moment was filmed by a hired camera man who accompanied the artist coming back after a residency in Japan and Brazil, seeing his parents without expecting him back in Europe at all.

?The light box 7 Saint avails itself to Christian iconology. Problems of the corporeal and violence inflicted on the body are implemented on mythical concepts. The ambivalent appearance of the models clears the way for a bridge to the present.

?The only work of In Situ which emerged during Krauss’ residency at the SCA in Sydney 2009 is Narcissus and his Echo. These two paintings – part of the series Chromosomes – are again dealing with the notion of the body as a metaphor – here as a signifier for the ego and external objects. Apparently showing a similar body, these works are constituted through the extensive use of oil paint – in opposition to the mythological disembodied phantasm of Narcissus’ mirror image. The ancient Greek myth of Narcissus and Echo and the fugacious simulacrum reveal in psychoanalytical sense stages of sexual development.

?The show In Situ, which encircles Clemens Krauss’ thinking and does more than try to be a retrospective, is completed through the display of the work Large Self-portrait shown simultaneously at the Art Gallery of New South Wales in Sydney.