‘between stars, between stones’ exhibition review in The Art Life

Which evocatively interprets Emma’s exhibited works and reflects on her recent performance at DMG, ‘States of Matter’. Musing on the many ways that Emma tries to bridge infinity and intimacy, Nadia discusses the artist’s use of ink, thread, stones, video and performance.The Art Life, Emma Fielden’s ‘between stars, between stones’ is the subject of a feature article by Nadia Odlum in

“The same title is given to another performance piece, which shows Fielden in her New York studio cutting a thread that holds two large rocks suspended in the air. The rocks crash to the ground, perilously close to the artist’s feet. … the heavy rocks hang suspended from the rafters [at DMG], as they did before their eventual and dramatic plummet. In this presentation of two states, I read the artist’s interest in cycles of matter. All matter, even the matter that makes up humans, is in flux – nothing stays in one state forever, and no state can be considered to be a beginning or an end.”

“There are two works titled ‘Cleave’. In one, dark paint pools upon the rich surface of thick white paper. The shape created could be joined to make one boulder-like whole, but instead it is divided, the two pieces framed separately, like a rock split upon a fault line.” 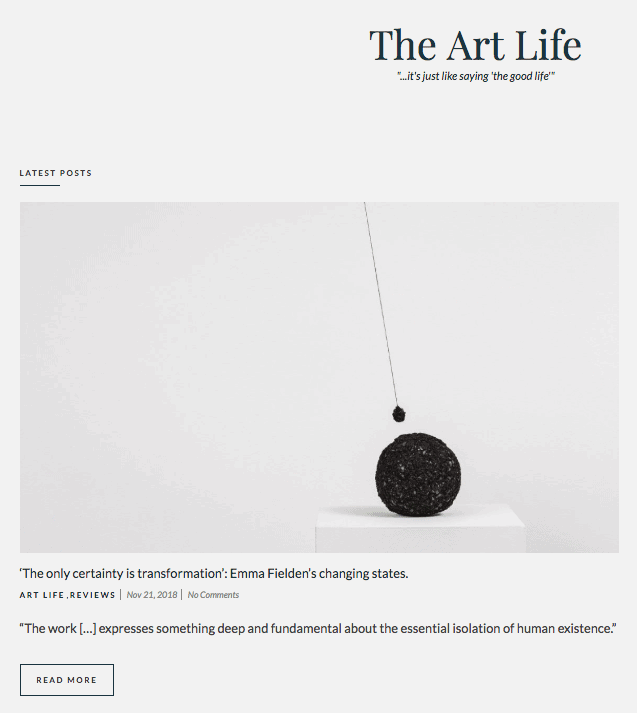